What do you do with your user’s password? Do you store it into the database?

You should never store the raw password into your application.

Some badly coded websites store the raw password into their database.

They store the actual password and even send you via email: 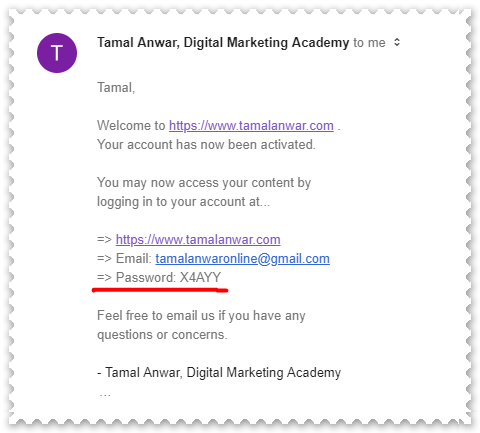 (by the way, I didn’t code that website, I used a plugin called DAP in WordPress)

As an app developer, you should not store the actual password into your database.

And, as a user you should stay away from such sites and inform the webmaster.

Hash the password and store it into your database​

When someone tries to log in, they will enter their password. You will have to run the hashing function again with that given password. Then you match this new hash with the stored hash.

When you hash the same password with the same secret key, you will get the same hash string.

So it will be a match and you know the password was correct and you go ahead and login the user.

To fix this, you have to generate a new string which will act as a salt. This salt will also be saved into the database for each user. Each of these salts will be unique per user.

So next, instead of hashing the password with a secret key, you use the salt to hash the password. That way now you will get a unique hash per user.

Here’s how I created a salt using the crypto module in Node.js:

So the next time you come across a website which sends your actual password when you forgot the password, know that your data is in wrong hands.